Love Story: Ripping off the Band-Aid

Ripping off the Band-Aid: A love story 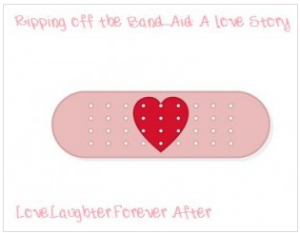 Everyone has heard of a “Groupie” right? Well, let
me start this story by saying, I was not one of them. I was a
Band-Aid. What is a band-aid? A band-aid is a woman who hangs out with
a band, but is respected, and wanted before 2 am. (Unlike a groupie,
who is a last call girl, as Amee would say). Now that we have that out
of the way, let me tell you the love story between me, and my awesome
rocker husband:

Ripping off the Band-Aid: A love story

I was in high school when I first heard about him, my bestfriend’s
boyfriend had a band, and as previously mentioned, I was a band-Aid. I
love being around music, and the people that were talented enough to
make it.Friday was “Band Night” in our small town, where me and all my
friends would head to a friends garage and listen to local bands all
night. As we were getting ready (which took about 2 hours because we
were rocker girls which required lot’s of make up and hair color) my
bestfriend turned to me and said “Oh, I’m going to introduce you to
your future husband.” At the time I just laughed and said ok we will
see. Little did I know that 4 years after that, she would have been
right.
He was the “new kid” in town, a Military brat that had just moved from
a base in South Carolina, he was the bands new DJ, and he was perfect.
He was the first person I saw when I walked into the room, and the
last one I saw when I left. I was Smitten. The next few years would
not be sunshine and rainbows, but I was taught to fight for what you
wanted, so that is exactly what I did.

What my lovley friend had forgotten to mention, is that
he had a girlfriend! I was heartbroken, but I stuck close by until
they broke up, (about 6 months later) and I knew he was mine! We had a
very fast and intense relationship, full of ups, and downs. Were
things perfect? NO. What is the point of a relationship? Boring! We
moved in together with a group of friends, (We actually had 5 of us in
a 3 bedroom) and we were all big into the local music scene. Partying
every night, and sleeping all day. The fun times of being young.

Then something happened. At age 19, I found out I was
pregnant. We were not ready to be parents, but we knew we had 9 months
to figure it out! So that is what we did. We moved out of the “Party
House” and in with my parents. On May 20th, 2008 we had our little 5
lb 2 oz Miracle, named Jaiden. Things were hard, being a parent is
hard for anyone, but being a young parent is even harder! It took it’s
toll on our relationship, but we made it through even stronger than we
were before.

People asked us all the time, “So now that you are
parents, are you going to get married” I don’t know where people get
that you must get married if you have a child, I think you should get
married if you are in love, and you are sure you want to spend the
rest of your life with that person. Plus I wanted to focus on Jaiden,
and all the joys and wonders that happen during a child’s first year
of life. So that is what we did.

When Jaiden was a year old, we moved into our own house,
and began to feel likea real family, and then the next big milestone
in our life occurred on Valentines Day. We had planned a big
Valentines Day party with our friends that night. My husband works
night, so on Friday nights me and Jaiden would wait up for him so we
could spend some time with him, Jaiden followed him into the kitchen
and she came around the corner holding a box. a Ring box, then Brandon
appeared, on one Knee and asked me to marry him. He was planning on
doing it at the party, but he couldn’t wait. So the only people that
saw were me, him, and our daughter, and I couldn’t have asked for
anything better.

9 months later, on November 12th, 2010, I married my best
friend, my lover, my rocking man. We Celebrated with an Alice In
Wonderland themed Wedding, then hopped a plane to Jamaica to start
our new life together in style. and we lived Happily ever after.
That’s my Love Story what’s yours?

You can read more of our love stories

email
Love Story: It Happened To Me Two Girls and One Guy