Obama ERA- How it is ruining our children 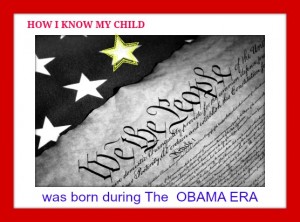 Obama ERA- How it is ruining our children

I often wonder if our children understand the lessons of our country. I wonder how much my child picks up. How much they associate with what goes on around us. What we say and what we do. Is it loud enough that they hear it and that they assimilate into their behavior.  I think about how the Obama ERA is ruining our children. What is it that I consider the Obama Era the socialism that is currently affected our workers to the point that they do that even feel the need to work There are others who will work to support them.

I think of the picture I saw of the welfare line. Yet there wasn’t a line the people who were awaiting their check were sitting and their shoes were in line for them. If they are that industrious should they be industrious enough to find employment?

So how do I know the Obama Era is ruining our children? In my home my daughter replicated a skill that she learned not from myself or her father who work 14 hours a day but from the government who works on spending our money with ease. She offered my son one dollar to clean up her room. I was excited and proud. She has a bank with money that she has earned. That was until she walked down stairs and pulled out my wallet and grabbed a dollar. I asked her why she was taking my money? Her answer was simple. “You make more money.” I further questioned her logic she is five. She said,”You say the rich people have to pay now for everyone. You have lots of dollars and I have three so I took yours.”  This is a lesson in be careful in what you say because your children will use it against you.There is truth to her point. I do have more than she does. What she doesn’t realize is she actually has more than I do. Her money isn’t used for health care, cars, food, electricity, education, insurance, and other expenses. Her money isn’t allocated to anything by anyone other than the person who has earned it.

I wonder isn’t that they way of our current government he or she works to earn money and is not already allocated by the government for someone else? It begs the question why work when someone else can? Why pay when someone else can?  The lesson here is if you want “something” go out and do what it takes to earn the money to buy it. If we all worked and we all paid the overall cost would be lower. That is a simple lesson in economics. In America our parents used to send the message that a hard days work earned our keep but with television and the Internet I believe that capitalism is slowly resounding on deaf hears. Ears that are deaf because they are attached to government issued cell phones.