The Best Horror Movies on Netflix

The Best Horror Movies on Netflix

Note- The movies on Netflix do change from time to time, I will try to make sure I update the list if Netflix removes a movie 🙂 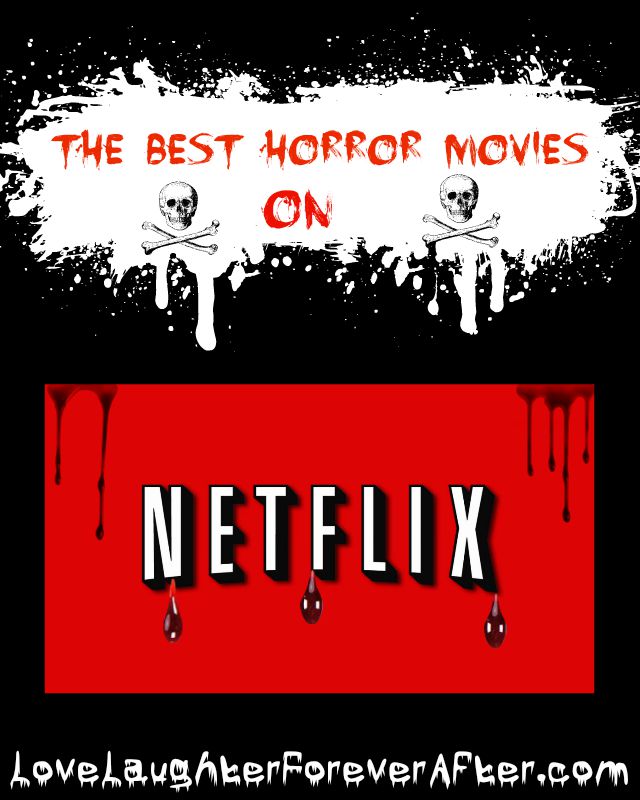 I know it’s only September, but as soon as Labor Day is over I am in Fall mode. And what’s the best thing about fall? That’s right, Halloween is! Halloween is my favorite holiday and my family and I go all out. We decorate the house, have matching costumes most years, and spend a month finding new ways to scare each other. We all know that Netflix has an awesome assortment of tv shows, documentaries, and cartoons. But did you know they have one of the best collections of Horror Movies out there!? No seriously! They have everything from B rated slasher films, to chilling ghosts stories, and everything in between.

Horror Movies are my favorite thing to watch all year round, but they are especially fun to watch when the time of year matches the mood of the movies right? So if you are a horror buff like me, or just need a background movie for your Halloween party, here is a list of Horror Movies that you will love!

Here are my picks for the best Horror movies on Netflix!

If You Love Slasher Films:

1. The Devils Rejects- One of my favorite Rob Zombie films, this little gem takes a backwoods family whose sole purpose is to kill people. It is a little raunchy. Great soundtrack too!

2. Saw – A slasher film with some morals. Who doesn’t love that right? I count this as a slasher film because even if the victims are slashing themselves, there is still a ton of slashing.

3. Scream (1 & 2)- If you are looking for a movie from your youth, scream 2 is perfect for you. It’s got all the main components for a great slasher film, and you know that mask still creeps you out.

4. American Mary- Although this movie about extreme back office plastic surgery may make you giggle, it is a horror movie through and through.

5. You’re Next- Another one of my personal favorites, You’re Next takes on the classic home invasion story and adds in some great twists.

6. Tucker & Dale vs. Evil- A pack of hillbillies that just love to cut up travelers that get lost. Simple, gory, and perfect for the slasher movie lover.

7. American Psycho-  Never be deceived by the good looking man in a nice suit. He can get as creative in his killing as the next guy. Nail gun anyone?

8. The Silence of the Lambs- Anthony Hopkins puts on a killer (ha, see what I did there?) performance as a serial killer that also likes to eat his victims. Hungry anyone?

9.Maniac- Now this is a remake that stars the man that played Frodo, but I promise it’s worth the watch.

10. Would You Rather- I love this movie! It was odd to see Brittany Snow in a horror film, but I think she did a fantastic job. This movie is all about what one is willing to do when they are desperate.

Supernatural Stories to keep you up at night:

1. The Taking of Deborah Logan- This movie scared the crap out of my. I don’t know what it is about demonic position, but it does it for me every time.

2. Oculus- I have heard mixed reviews about this movie, but I personally really enjoyed it. I have a fear or mirrors anyways, and this movie just made it worse.

3. The Ward- Any movie that takes place in a haunted mental hospital will get my vote any time.

4. The Babadook- This movie is scary and unnerving. You never want to hear your child say a monster has entered your home through the pages of a childrens book do you?

5.The Monkeys Paw- If you find the monkeys paw you get granted 3 wishes, but as always, be careful what you wish for!

1. Paranormal Activity: The Marked Ones- Now I am sad that the original movie isn’t on Netflix, but this always another great choice.

2. V/H/S (1 &2)- Another one of my favorites, these movies are really unsettling. As with a lot of found footage films though, the camera angles can be a little much at times.

3. The Sacrament- Now, some people may argue that this is a suspense movie rather than a horror movie. I disagree. The fact that a story is based on true events where hundreds of people decided to commit suicide together scares the crap out of my.

4. Grave Encounters 2- Another sequel, but a really scary one. After a film crew spent a fatal night in Collingwood Psychiatric Hospital a year before, a new crew is coming to find out why.

You can never go wrong with Classic Horror flicks:

1. The Exorcist- In my humble opinion this is one of the scariest movies of all time point blank period. Demons are scary ya’ll!

2. The Omen- I told ya’ll demons are scary, but the devil inside of a little boy? The worst!

3. Rosemary’s Baby- And yet again, being pregnant with a demon spawn (literally) has got to be pretty awful.

4.Night of the Living Dead- All you walking dead fans should watch this movie and thank it for bringing forth a love of creepy zombies.

5. Children of the Corn- I don’t know what it is about movies that start creep kids, but it always gets to me. I’m always afraid after watching a movie like this that my little princess is going to turn in to a murdering demon. hmm.

Other (scary movies that don’t have a set theme):

1. The ABC’s of Death- One of the most unnerving things I’ve ever watched. 26 different movies by 26 different directors that each got a letter. Their job was to show a way to die with that certain letter. Some of them went wayyyyy out there.

2. The Human Centipede- People either love this movie, or they hate it. If you haven’t seen it, make sure you aren’t eating when you do. You will thank me.

3. Teeth- This movie is literally about a girl who has a toothed vagina. There is no other explanation needed.

4. Sharknado- Now is this movie horror? Maybe not. But you need to see it anyways because it is B rated awesomness. Also my daughters favorite, so she told me I had to include it.

Well, there it is, some of the Best Horror Movies on Netflix! Have a suggestion that isn’t listed here? Please let me know and I will add it! Happy Horror!

email
School Snacks Made Easy With Help From Aldi! #ALDIgivesback Halloween Recipes That Are Perfect For Your Halloween Party

Awesome New Perk from Shemar and The Bounce Back