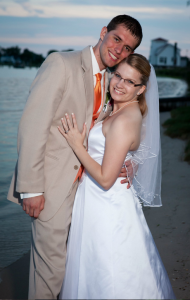 Garrett and I met in 2004 at our local Target store while working as cashiers and this is our love story, Garrett was 16 and I was 17. We rarely worked similar hours as we were both in high school- I was homeschooled though so I was working the day shift most of the time, which caused Garrett to think I was much older than 17. A mutual friend of ours was kind of like the messenger between us at Target – she would tell me that Garrett wanted me to come through his line to buy my personal items and my response was usually “who is this Garrett kid!?!” Well…. on Halloween night of 2004 we actually were both working the evening shift and we finally sparked a conversation with each other, exchanged phone numbers on Target receipt tape (which I still have)!

From then on, our conversations were through email or the phone when we weren’t at work. A month later, Garrett went away with his family for Thanksgiving and we would talk every night on the phone- our excuse to our parents was that I was giving Garrett his work schedule. We truly developed a very strong friendship through our nights of working together and chatting in the car after work- we really got to know one another during that time period. My parents were strict on the whole dating scene and Dad was adamant on meeting any guy before he gave me the okay to date.  On Valentine’s Day, 2005 Garrett stated that he assumed he left his name badge in my car. So, I gave him my keys and on his break, he went to my car and put a dozen red roses and a card on my passenger seat! The card (which I still have to this day) said- I will wait forever for you if I have to!-  Love, Garrett.

He knew that my parents were quite strict on the whole dating thing so he was showing me that he was willing to wait for me. When I got home that night, my Mom told me that I needed to go tell my Dad about this Garrett kid or she would. So, I went up to tell my Dad that I met an amazing Christian guy at work and I’d like for my Dad to meet him.  Our friendship continued to develop at work and Garrett finally met my family at our annual Church Easter Play that April. I always joke that Garrett met my Dad at his weakest point because Dad was playing the part of the angel Gabriel- and had white tights on…. Hehe! J Garrett’s parents also came and I met them for the first time. Dad approved, and our dating relationship began! Throughout high school, I went to Garrett’s proms and homecomings and we really did fall in love. I graduated from high school in 2005 and waited an entire year to go away for college so that we would go at the same time- Garrett graduated in 2006. After Garrett graduated, we both went away to college- I was in southeast Pennsylvania and Garrett was in West Virginia- for the next 4 years, we carried on a long distance relationship (approximately 7 hours one way from each other) and looked forward to the few weekends and summers we were able to spend together. We knew that we wanted to get married, but also knew that finishing college was an absolute necessity. We had our hard times but we always made it out on the other side as a stronger couple- upholding our Christian values and continuing to develop that strong friendship with each other and God together.

Finally, my junior year of college, Garrett came to visit me in PA for our annual banquet- and at Longwood Gardens in Kennett Square, PA he proposed to me- it was truly a fairytale proposal as he surprised me at one of my favorite places to visit near my college! We immediately started to plan the wedding but knew it would be a few years away as Garrett had a great opportunity to attend college for an additional year and graduate with both a Bachelors and Masters- he did that while I came back to Maryland and started my career with the Federal Government. I graduated college in May, 2010 and Garrett graduated on May 11, 2011- we were married on May 21, 2011 (just 10 days after his graduation). As we come upon our 2 year wedding anniversary, I think back on this unique love story and I am so thankful for the friendship we developed so early in our relationship and I am blessed to be married to my best friend! I cannot explain how much Garrett means to me – he is my best friend, soul mate and a wonderful husband!