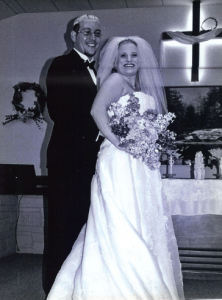 This Real Love story is Gwen’s. In the interest of honesty, I never dated in High School. I don’t even really remember wanting to. I was in my twenties when I decided that I had some time for fun. I wasn’t going to make a list of what I wanted but instead had a list of what I DIDN”T Want.

No one living at home

No being picked up at a bar

Well suffice to say, I met my husband on June 22, 2002 while going out to a bar with friends. We didn’t actually meet at the bar but at a friend’s house first but I have conceded to the fact we talked the most at the bar. The funny thing is he thought I was a snob! In my defense, this was to be a girl’s night only until she invited him to come along. They were old friends and it was her birthday so I really couldn’t complain.

He quickly realized although I may be a snob, I was a sucker for his son. He showed me the cutest picture of this little redheaded child and I was hooked. We spent the rest of the night lost in our own conversation. I was a bad girl and went home with him that night against the advice of friends. They told me it would only be a one night stand.

I knew within a few days that I loved him and freaked out the day he wanted me to meet his son. It was the most nerve wracking day of my life because I knew his son meant the world to him and I was worried he wouldn’t like me. I did pass the test and within a few weeks he officially moved out of his mom and dad’s house and into my apartment.

He worked for a landscaping company and wasn’t making more than minimum wage so he kept pushing off the idea of proposing. I finally told him that it didn’t matter if it was the ring on a pop bottle. I wanted to marry him and not his checkbook. He proposed on October 18th at my birthday celebration with my family. He had already gotten my dad’s blessing. I found out later that my dad, in all his humor, asked him if he was sure because there were no refunds or exchanges.

Our marriage has not always been easy, fun, or stress-free but I wouldn’t trade a minute of it for what I do have. A husband who loves me in spite of all my quirks, 2 children who mean more to me than life itself, and a family that has been thru trials together and came out closer and more bonded than when they started.

My word to those still looking for that special someone- Don’t brush off someone just because they aren’t what you said you wanted or didn’t want. They may end up being exactly what you needed.